>Annapolis MD to Mystic CT via Montaulk Point on Pandora

As I write this, it’s 2pm on Saturday June 12th and we are about 40 miles south of Long Island headed to Montauk.  The winds have filled in nicely from the south at nearly 20kts (one knot is 1.1 statute or land mile per hour).  With the wind behind us and at a good speed, we have been clipping along at a nice rate of speed for much of the day, reeling off the miles as we head toward Montauk, the eastern most point of Long Island.

Being on Pandora when the conditions are like this is quite exhilarating as it was conditions like theses that she was designed and built for.  Today she had bursts of speed at 9.3 kts and steady, hour after hour, speeds in excess of 8kts, a respectable rate of speed for any boat.

On Thursday afternoon I met up with my crew and we made our way to Annapolis to prepare to bring Pandora to CT and her next “home” in Mystic CT where she will be for the second half of June and into late July, when we take her to Maine.

With a total of 4 crew, including me, we would have enough on board to handle the boat if things got messy, and I felt secure knowing that each of them had good offshore experience.  Here’s Burt and Dick, two of the three. One was catching up on sleep down below. 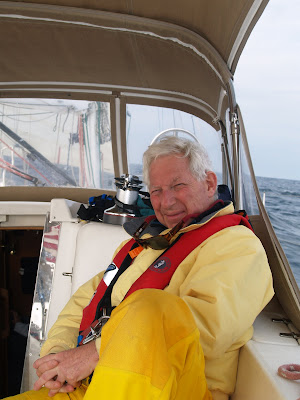 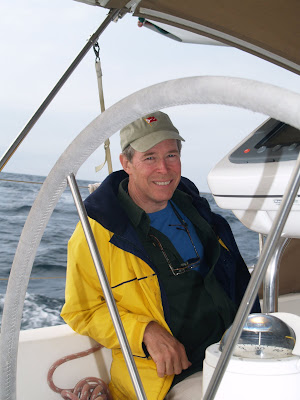 As I wrote in a past post, I did some upgrades to my rig over the winter to prepare Pandora for offshore sailing. When the going gets tough, you have to be prepared to sail under reduced rig and a storm jib is a must.  Here’s a shot of my jib hoisted prior to departure.  Glad that the guys at Quantum Sails got the measurements right.  Now we are ready! 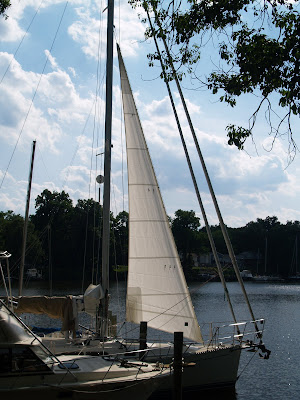 Taking a boat out into the ocean, especially a small vessel like Pandora requires lots of safety gear.  Aboard we have key gear to keep us safe in the event of  a “water landing” as they say on the airlines.  We have a liferaft and EPIRB (a transmitter, registered to Pandora that will alert the authorities via satellite if we get into trouble.  You may have heard that they young teen sailor Abby Sunderland had hers go off recently when her boat Wild Eyes was dismasted in the Indian Ocean.  Her EPIRB was able to alert rescuers and she was found and picked up by a fishing boat that steamed to her rescue.

You can’t be too careful as miles from land you won’t last long in the water without the proper gear. 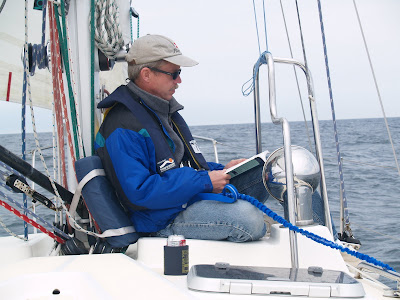 Here’s a shot of me sitting near the mast as we headed toward Montauk, clipped on of course, wearing an inflatable vest.   Everyone on Pandora must clip on to the boat whenever they are out of the cabin at night and on deck at any time when we are off shore and the winds are up.  It’s very hard to get someone back on board and especially tough when conditions are rough.  When it’s dark,  the odds are not good at all that someone overboard will be found.

Our trip from Annapolis took s north in the bay, through the C&D canal and down the Delaware River.  The river runs hard, combining tide and current so for much of our run down the river we were making better than 10kts over the bottom even though we were motoring in calm conditions.

However, a few hours before we passed Cape May and the mouth of the Delaware, the tide and current turned against us and our progress slowed to under 5kts over the bottom. The current can make a tremendous difference in boat speed as we were still making close to the same speed through the water.   A combination of current and a freshening wind on the nose slowed us down.

Green power?  Some think so.  It’s a good thing that the Salem nuclear plant is so close to Atlantic City as the lights were really bright in AC when we passed it in the wee hours of Saturday morning.  This plant is the biggest thing on the lower Delaware. 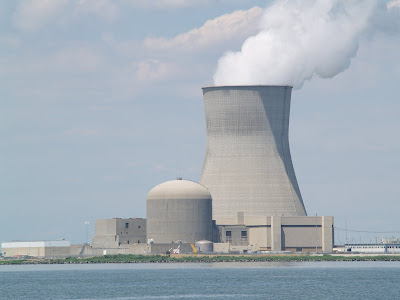 We passed Cape May just after dark on Friday and began to make our way up the coast making our way toward Montauk point at the eastern end of Long Island New York.

When making a passage we have to keep the boat moving around the clock as there’s no way to just stop and sleep without diverting to a harbor miles away.  In order to make sure that everyone is kept rested and fresh, we divide the crew into watches.  In this case there are four of us so that’s two in each watch.  Beginning at 8pm, there are two of us on deck at any given time, with the off duty watch down below resting and catching up on sleep.  Our watches for this trip last 3 hours which gives a reasonable amount of time to sleep between time on deck.

While we ran the engine all the way to Cape May, a distance of about 100 miles, the wind filled in nicely from the south over night allowing us to sail much of the time.   The wind lightened up considerably later in the morning but ended up freshening again and is now blowing 20kts, a perfect amount of wind for this point of sail.  Of course, when you are running with the wind the actual speed of the wind seems like a lot less given that the boat speed is subtracted from the actual wind speed.   So far, our speed maxed out at 10.3 kts.  Not bad. 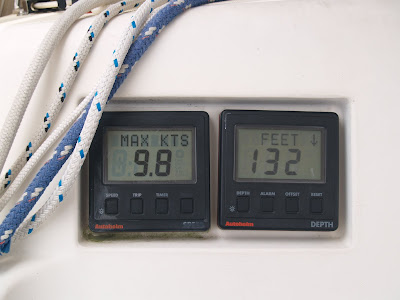 As of now we have been underway from 4:45am on Friday morning, about 34 hours, and have covered 241 miles through the water at an average speed of 6.8kts.  A respectable speed to cover distance.

There’s a lot of ship traffic in the Delaware and this particular ship is one of the more interesting.  I can’t imagine what it must carry given these massive cranes on deck.  Imagine how she rolls in a seaway?  Perhaps they are put down on deck when the going gets rough.  The color, not common for a ship.  Perhaps a better color for a Mini Cooper car.  It does show up well thought. 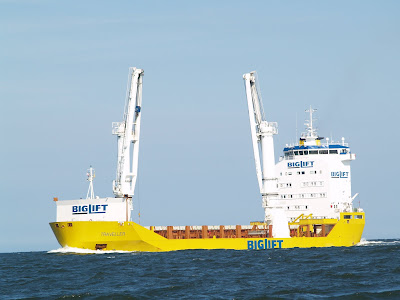 We expect to reach Montauk in the very early hours of Sunday and will make our way up to Mystic where we will leave Pandora and make our way home.

With all the dredging that’s done on the Delaware, there are piles of fill on each side of the channel.  The constant currents are pushing all the sand around and it requires near constant dredging.  It’s hard to imagine that ships could have made it up to Philadelphia, more than 100 miles from the ocean prior to power dredging.  And, with the currents, what a tough trip it must have been under sail.

Who can resist a shot off the stern of Pandora to see how wonderful the conditions are.  Even though we are making time, it’s quite calm and steady aboard. 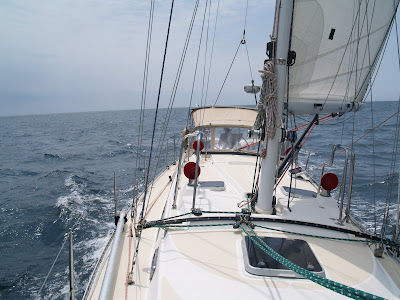 This is what sailing is supposed to be.   The a steady breeze from behind and smooth seas.  Hey, life should be like that all the time!   Hmm…

>It’s been a while since I last wrote about Jessica Watson, the young Australian Girl that sailed around the world, returning just a few weeks ago.  It seems that Jess has been hard at work, and was while she sailed aboard Ella’s Pink Lady, writing her book which is now scheduled to be available in August.

Her new book True Spirit sounds like it will be a fun read and I for one will have to get a copy. 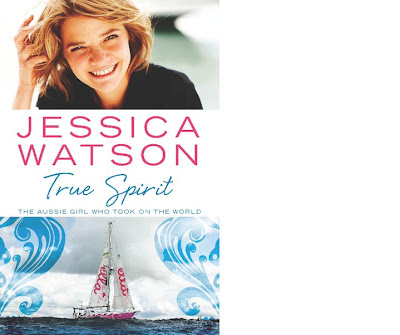 You can check out more of what she has been up to by going to this link.  And some more detail about her book, True Spirit is here.

As any self respecting 16 year old solo circumnavigating sailor would do, Jess filmed a promotional video for her book in the middle of the Indian Ocean that I found on YouTube.

The book, according to her website…
“she details the extensive preparation she and her team made for the big voyage, her journey and the battles she fought along the way – against sleep deprivation, gale-force winds, mountainous seas and the solitude most of us can only imagine. When she sailed back into Sydney Harbour on 15 May 2010, after 210 days at sea, she was cheered in by a huge crowd that included Prime Minister Kevin Rudd. To many, Jessica was our newest hero. She disagreed, saying she wasn’t a hero, “just an ordinary girl who had a dream and worked hard at it and proved that anything is possible”. This is her story. About Jessica: Jessica was born on 18 May 1993 on Australia’s Gold Coast. She left Sydney Harbour on her quest to become the youngest person to sail solo, non-stop and unassisted around the world on 18 October 2009 and arrived home triumphant seven months later. “

Further, somewhat random, details about her voyage are…

Some facts from the book:
• Jessica sailed more than 24,000 nautical miles in seven months
• Her favourite meal on the journey was steak & kidney pie heated in the onboard pressure cooker
• She suffered six knockdowns (when the mast goes underwater) during her journey, including four in one particularly bad storm off the Falkland Islands during 70-knot winds and 10m waves
• Jessica took with her 32 tins of spam, 150l of milk, 64 tins of potatoes and 160 popper drinks

Meanwhile, Abby Sunderland, another teen trying to sail around the world, had her voyage meet an unhappy end with her boat Wild Eyes was dismasted during a storm in the Indian Ocean.  Fortunately, Abby was rescued by a fishing boat and will take several weeks to find her way home.  She says that she is writing a book too.  I’ll bet she is, and it should be an interesting to read given all of the difficulties that she encountered along the way.

Now, all I have to do is to find another sailing voyage to follow. Any suggestions?