>Well, the season is really over and Pandora will be hauled for the Winter on Tuesday morning at 8am in Bridgeport CT.

Yesterday I visited the Quantum sail loft in Norwalk CT and had TK (the sailmaker) take a close look at all of Pandora’s Sails. He had sailed with me in early November to take a look at their shape under way and we decided that the genoa and main were pretty bad. That’s not surprising because both the genoa and main are origional at 9 years old and near the end of their life. When sails get old they stretch out which means that they no longer have as good an aerodynamic shape. In simple terms this means that the boat heels over more because the air flow over the sail isn’t as clean. As a result, more heeling over and less going forward, a combination that’s not good for the crew. And, like many girls that I know, Brenda doesn’t like to heel at all. However, the shape of the working jib isn’t quite as obvious and may still be in reasonable shape and last a few more years. The previous owner had said that it was only 4 years old.

Anyway, it’s interesting to see just how big these sails looked in the loft. 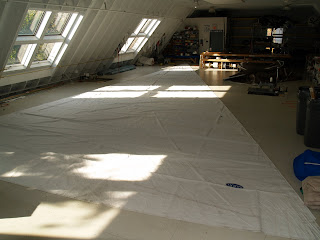 The largest is the genoa which weighed in at a hefty 658 square feet. In fact, it’s a 154 meaning that it’s size if 154 percent of the foretriangle of the boat (the part forward of the mast and aft of the forward stay). The largest genoa that I had on Elektra was a 140 and that was big. Anyay, that sail is really for light wind and off the wind work so it needs to be big, and it really is. 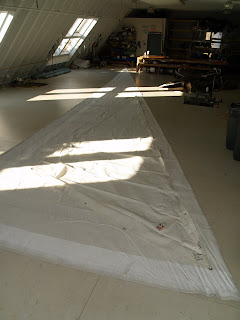 The inner jib is much smaller but still looked tremdous when laid out on the floor. It has a luff (the total hight from foot to head) of 54′ and 360 square feet, which explains why it looks so big. Even though it’s half othe size of the genoa, it’s still a really big sail. You an see in the photo just how much of the room it took up. And, it’s the smaller of the sails. On top of it is the storm jib which is a lilliputian 106 square feet. It needs to be small as it will only be used when it’s blowing over 35 or 40 kts, something that’s not loads of fun.
The third photo is of the main. It’s still huge at 400 square feet. that means that when I am flying the genoa and main I have up over 1,000 square feet of sail. Most impressive, I can tell you, especially when the wind is a bit too strong. Oddly, while the sails look really enormous in the loft, they don’t look that big on the boat. And the working jib looks downright small. 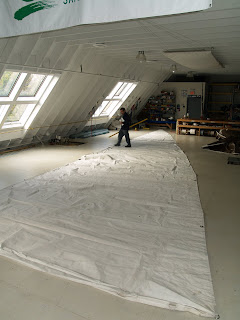 This photo is of the main which I have included to give you a real feel for just how big it is. That’s TK and he’s not a minature guy at all. That’s a really big sail.
Anyway, the plan is to replace the main and genoa this year and see what the jib looks like when we check it out again in the Spring. I am thinking about putting foam luffs on the jib and genoa so that I can roll them up a bit when it gets too windy but not so much that I want to shift to another sail. A foam luff is created by putting closed cell foam in the front of the sail in varying widths so that when the sail rolls up it does so in a way that helps the sail keep it’s shape.
Interestingly, in our global economy, the sails will be made in South Africa and airfreighted up to the States. And, they still cost a fortune.
Well, we do need to be able to make those fast SAGAs fast. 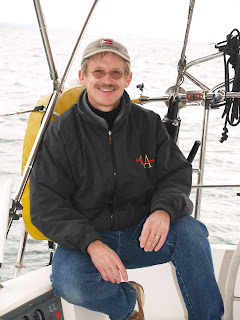 Today my son Rob and my longtime friend Christopher Blossom went out today for what will likely be our last sail for the 2007 season. Pandora is now on a dock in Bridgeport CT where she is scheduled to be hauled just before Thanksgiving at Captain’s Cove Marina. This harbor is where Brenda and began our sailing together when we were members of Fairweather Yacht Club sailing our 20′ Legnos Cape Cod Catboat. Anyway, today the winds were terrific for an afternoon sail with light to moderate winds out of the Northwest. When we left the dock at 11am there was only a light breeze but eventually it built to about 12-15kts in the early afternoon. We sailed out toward Long Island and tacked around a bit. When the wind freshened we took off at 7+kts, a nice rate of speed. Even though it was mostly cloudy, it wasn’t too cool as the temperatures were in the high 50s to low 60s. Here are a few shots we took on Pandora today including a shot of me to the right, the happy skipper. My son Rob in the “shades” and Chris are also here. I hope to be out at least one more time before haulout but who knows… 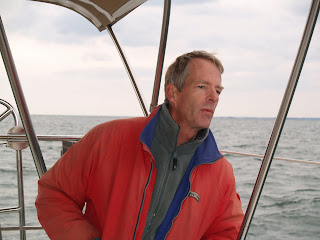 We spent a lot of time talking about sailing South. Chris was probably thinking about about sailing there again on his own Luders 33. He took the exact trip I hope to take down the Intercoastal with his wife Pat and their two sons about ten years ago. Following their trip to Florida they crossed over to the Bahamas and spent much of the winter sailing from island to Island. 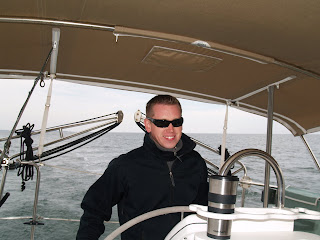 For now this will have to be my “last sail” unless I can find a way to squeeze in another. 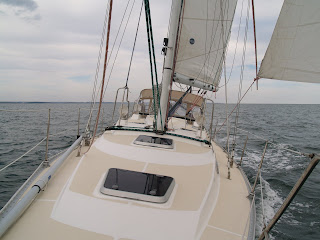 My son Rob at the helm of Pandora